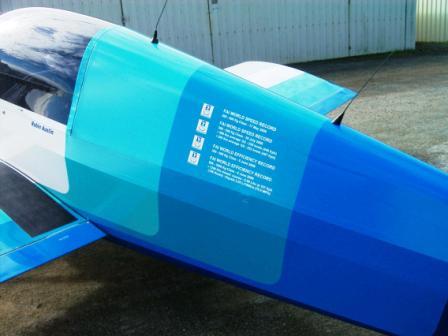 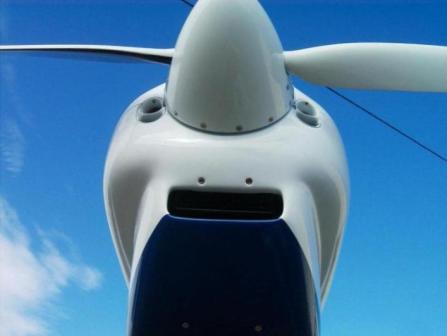 Building and Developing a Unique Aircraft

The story of VH-SGS’s existence started in 1992. Dissatisfied with the slow speed of my Skydart ultralight, I purchased a VW powered Sonerai 2L. This well designed, practical aircraft provided 250 hrs of flying enjoyment, however although the VW motor had served me well, it wasn’t ideal for my frequent Bass Strait water crossings. I considered an upgrade to the extremely robust and successful 4 stroke Rotax 912 but this was complex and unviable so I eventually followed my next dream of building a VANS RV6. For 6 years I enjoyed the RV but as my family outgrew flying, its operating costs became objectionable.

My thoughts reverted to the original idea of a Rotax powered Sonerai, remembering the responsive, fast, low maintenance airframe. In 2000 I finally committed to a new Sonerai based project, however this time with the valuable knowledge from previous ownership and 250 hours on type, I had the opportunity to make many carefully engineered improvements.

The main objective was to replace my RV6 with a highly efficient aircraft of similar high speed performance and reliability, room for two 6’1” adults, aerobatic capability and an efficient glide for safety reasons, but with substantially lower operational costs. A huge challenge, but not impossible.

SGS was in no way built as a racer although I was fanatical about achieving highest standards in construction,  finish and aesthetic qualities. Solid countersunk AN rivets were used for high efficiency and to build a quality base for further development.  Many aerodynamic compromises were however accepted to improve the overall functionality, including a taller, wider and longer canopy and extra cockpit occupant space. Also, increased wing angle of incidence and reduced instrument panel height for better in-flight visibility, and larger massed-balanced, modern shaped tail surfaces and taller turtle deck for improved control authority and positive stability in all 3 axes. These compromises were offset by a complete re-engineering of the aircraft from the firewall forward including sleek, new, low-drag engine cowlings.

Because of these many changes, initial construction took 3300 hrs over 4 years. 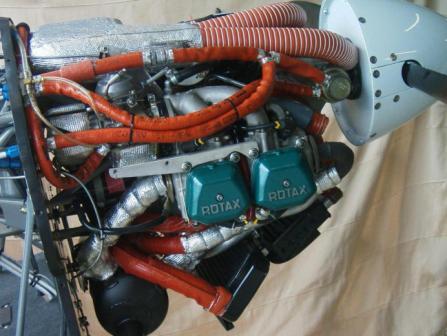 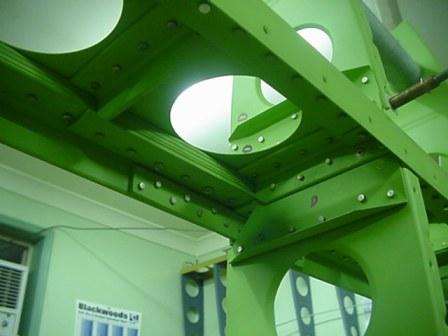 Finally in 2004 I test flew my new 100HP Rotax powered Sonerai based aircraft. In addition to its award winning standard of presentation and attention to detail, it did all things my old Sonerai did except better and this time with a higher cruise speed of 143 Knots despite a mismatched propeller. With all the excitement of my new machine, life was about as good as it gets!... however... it wasn’t long before a performance improvement program commenced!

Despite striving for exceptional performance, I remained committed to retaining a stock engine and using stock RPMs. Safety was paramount and I felt engine modifications would compromise flying enjoyment. I set about methodically making changes to the airframe, striving for aerodynamic efficiency & handling improvements, evaluating each change and where beneficial, consolidating the improvements.

So where did I start? As there were no commercially available propellers that would operate efficiently above 130 Knots at Rotax’s low propellor RPMs, I had designed and constructed a custom 65” X 90” wooden propeller. It turned out to be way over-pitched so lots more re-carving, re-measuring and re-checking eventually resulted in reduced pitch, an increased climb rate of 1320 ft/min and an increased maximum cruise speed of 150 knots.

My method for accurately determining speeds is via multiple two-way GPS measured passes over a 20 NM test course, away from rising terrain, thermals or coastlines and maintaining height with strictly no downhill advantage, then correcting for the wind vector and density altitude. Without strictly adhering to this type of technique, performance comparisons are futile.

Further airframe development included the obvious taping of joints etc. The less obvious developments included meticulous optimisation of the engine bay air entries and exits and all cooling drag. Despite drag being dramatically reduced, all engine operating temperatures are easily maintainable “in the green” regardless of OAT, aircraft load, power setting or duration of power application.

With these major refinements (and many minor ones) the airframe drag continually decreased necessitating continual propellor development to progressively add pitch. The irony of this was that after many, many hours of airframe and propellor development and testing, the final pitch was back where it had started. I guess that’s what we so politely term “experience”! 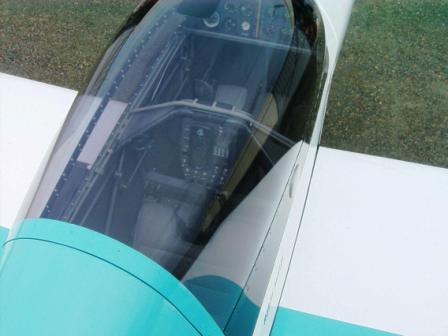 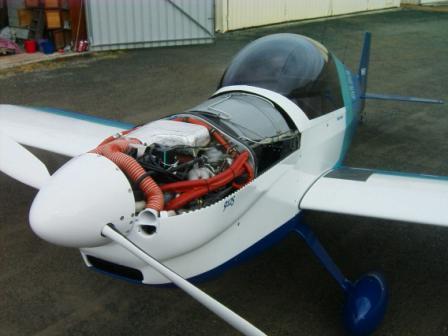 With the reduced drag, SGS was now capable of cruising at 161 knots and had a propellor to suit, however the pitch was very coarse such that the propeller was partially stalled at all speeds below 105 knots, with corresponding decreased thrust in that range. Above 105 knots however, performance was good with a 1600 ft per minute climb rate and good top-end speed.

As the speed envelope expanded, the need for an In Flight Adjustable (IFA) variable pitch propellor increased. Problem was, there are none available that suit Rotax’s low propellor RPMs and SGS's speed range. Fortunately I became involved in the development of a brand new, IFA propeller with a leading propeller manufacturer Bolly Props Australia, and was afforded a clean slate re blade design. After a year of solid engineering, development and static and dynamic testing, the prototype propeller flew. The utility of SGS was further transformed and with the new propellor and other airframe improvements it now climbed at 1920 ft per min with a maximum cruise speed of 170 knots. This speed is not particularly economical however, nor used frequently for regular cruising.

Cruising speeds of 160 to 165 knots are more practical, economical and without any turbulence constraints once above 8000’. 160 knots cruise is achievable up to FL140 and provides added flexibility to stay above most weather (& yes, SGS has mixture control and oxygen). At 160 knots, engine RPM can be as low as 4600 and fuel consumption is typically 16 litres/hr depending on altitude. Cruise speeds reduce with increased loading, however even when carrying a passenger and baggage, 160 knot cruise is still practical between SL and 10,000'. 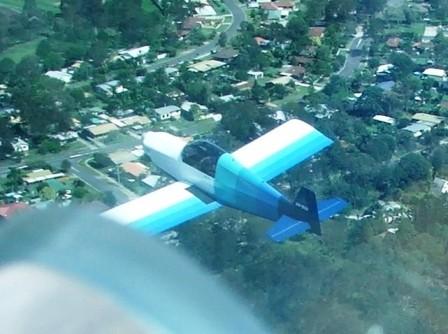 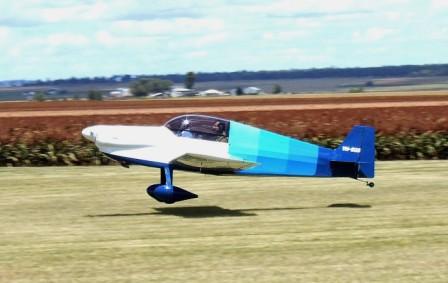 So with these substantial developments completed, what was the next challenge?

The Federation Aeronautique Internationale (FAI) has been the sole authority for administering, verifying and issuing all flight World Records for over 100 years, virtually since the invention of manned flight.  One FAI category, “Speed Over a Recognised Course” requires accurate time and distance measurement and incontrovertible proof of an aircraft’s averaged flight speed over a recognised, pre-approved, one-way course exceeding 400 Kms in length.

After extensive research, preparation and planning, I was ready to attempt to raise the speed benchmark in the 300 to 500 Kg aeroplane class. Two flights were undertaken in this category with the best result on 28th July 2008, a 500 Km flight from Blackall to Rockhampton (Australia) completed in 68 minutes with an average ground speed of 440 KPH (238 Knots : 273 MPH).

Although there’s no record category for a shorter 200 Km flight, one 200 Km section was covered in 25 minutes at an average ground speed of 467 KPH (252 Knots : 290 MPH) and the GPS based flight logger confirmed ground speeds over 300 MPH for some sections. It was quite bizarre watching the kilometres click over at 7 second intervals.

The other category of interest was the “Aeroplane Efficiency” category.  I was fully aware that an aircraft with such a short wing was not normally regarded as exceptionally efficient however my flight data had shown that SGS in fact was.

Aeroplane Efficiency World Records require a non-stop flight around a closed triangular course, the total required distance being determined according to the weight class. Once again, there is almost overwhelming criteria to satisfy the FIA that everything is legitimate.

Again, two flights were undertaken in this record category, the most pleasing result being achieved in the coveted 500 to 1000 Kg class. To meet these weight requirements, full fuel and 90 Kg of ballast were loaded. After over 6 hours flying around the closed course, a World Record was established by using only 43 litres of fuel for the 1200+ Km flown, a record minimal consumption of 3.55 L/100 Km.

Surprisingly, despite 6.4 hours in the cockpit, comfort (or lack thereof) was not a problem.

On all four record attempt flights, new World Records were established and subsequently ratified by the FAI in Switzerland. These speed and efficiency flights exceeded the benchmarks at the time and remain today as the best recorded flight performances in each weight category for any aeroplane type. The results are apt reward for the incalculable hours of development undertaken and in particular when considering SGS is not a single purpose race special but in fact a legitimate 2 seat utility aircraft with a standard Rotax engine. 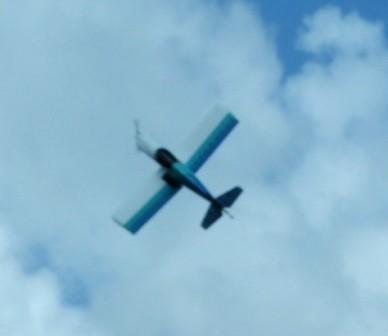 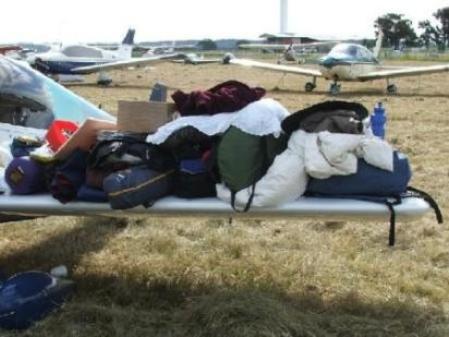 As well as being an exceptionally fast, efficient and agile aerobatic sports plane, SGS is a comfortable, capable cross country tourer that regularly carries 2 X 90Kgs (200lbs) people, 2 tents & sleeping bags, air mattresses, doonas, pillows etc and all personal belongings on 1000+ Nm trips. With 103 litres (27 USG) usable fuel, SGS can remain airborne for over 14 hrs and could fly across the entire mainland USA at its widest part with only 1 fuel stop.

By limiting its unusually high fuel load, not for structural reasons but rather to comply with stall speed regulations, SGS can be flown in Australia as a 2 seater on a Recreational Pilot's Certificate. This load limitation is not unusual or onerous and with a still healthy payload, is a minimal trade-off to fly at these speeds on an RAA Certificate and without a pilot's medical.

Due to the airframe improvements and the NACA 64A212 wing section, even when flown in turbulence SGS displays no nervousness, is directionally unaffected in all axes and has good ride comfort throughout the entire speed range.

SGS has a demonstrated service ceiling of over FL 240 (24,000 feet), this being above 60% of earth’s atmosphere. Although flying at this altitude serves no useful purpose other than extreme efficiency, it can be interesting. It was surreal hearing a QANTAS 747 reporting at my position in established flight-levels cruise and then seeing it appear above, complete with contrails and appearing to almost fill the canopy.

SGS is as fast as most RVs and many Glasairs and Lancairs and can tour comfortably with aircrafts in their performance category, yet costs half as much to operate. It provides unbeatable, high-speed, economical personal transport, is several times faster than a car and costs substantially less per mile to operate.

Despite being very quiet and environmentally friendly, SGS outperforms all other known 2 seat 100 HP aircrafts and would likely have better economy for speed than any other 2 seat vehicle. Finally, it has award winning build and finish qualities to complement its performance. 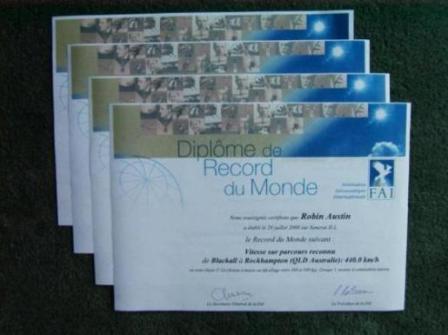 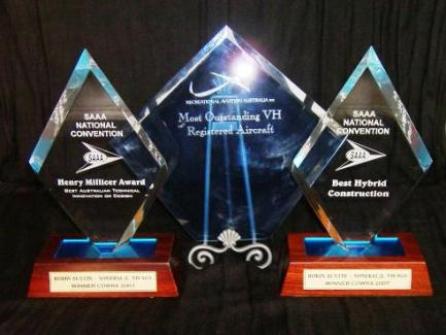 Most importantly, the construction, design and development of this unique aircraft has always been extremely educational and rewarding. VH-SGS remains a source of immense pride and is an excellent example of the type of advancement and outcomes achievable using the privileges available within the Experimental Aircraft Category.

The Sonerai airframe structure used as a basis for this aircraft is designed for up to 90 HP. For anyone considering a similar project, fitment of 100HP or utilising any of the other listed modifications requires appropriate risk analysis and professional engineering design and application.